Venice Biennale 2019: The Must-See Pavilions and Exhibitions by Women Artists, Beyond the Giardini

Seaport District’s Anderson Contemporary holds the opening reception for “Out of Line,” a new group exhibition featuring emerging to mid-career Abstract Expressionist artists, on view from May 22nd – July 31st.

Anderson Contemporary is a gallery you may or may not have noticed when heading to work at Seaport District’s 180 Maiden Lane. Why? Because the gallery itself is actually within a massive sky-high, sunlit atrium plaza of an office skyscraper located at an iconic part of the East River waterfront.

From art exhibitions to charity events, musicians, dancers, and animation film festivals, Anderson Contemporary is a cultural and social renaissance surrounded by an emerging green space and a curated collection of inspiring artworks chosen by New York-based art dealer, Ronni Anderson, the former director of Southampton’s Keszler Gallery and Lower East Side’s Mayson Gallery. In 2015, Anderson was approached by David Sturner of Clarion Partners who placed her as the head of 180 Maiden Lane’s art collections, bringing in an eclectic array of emerging to mid-career artists. 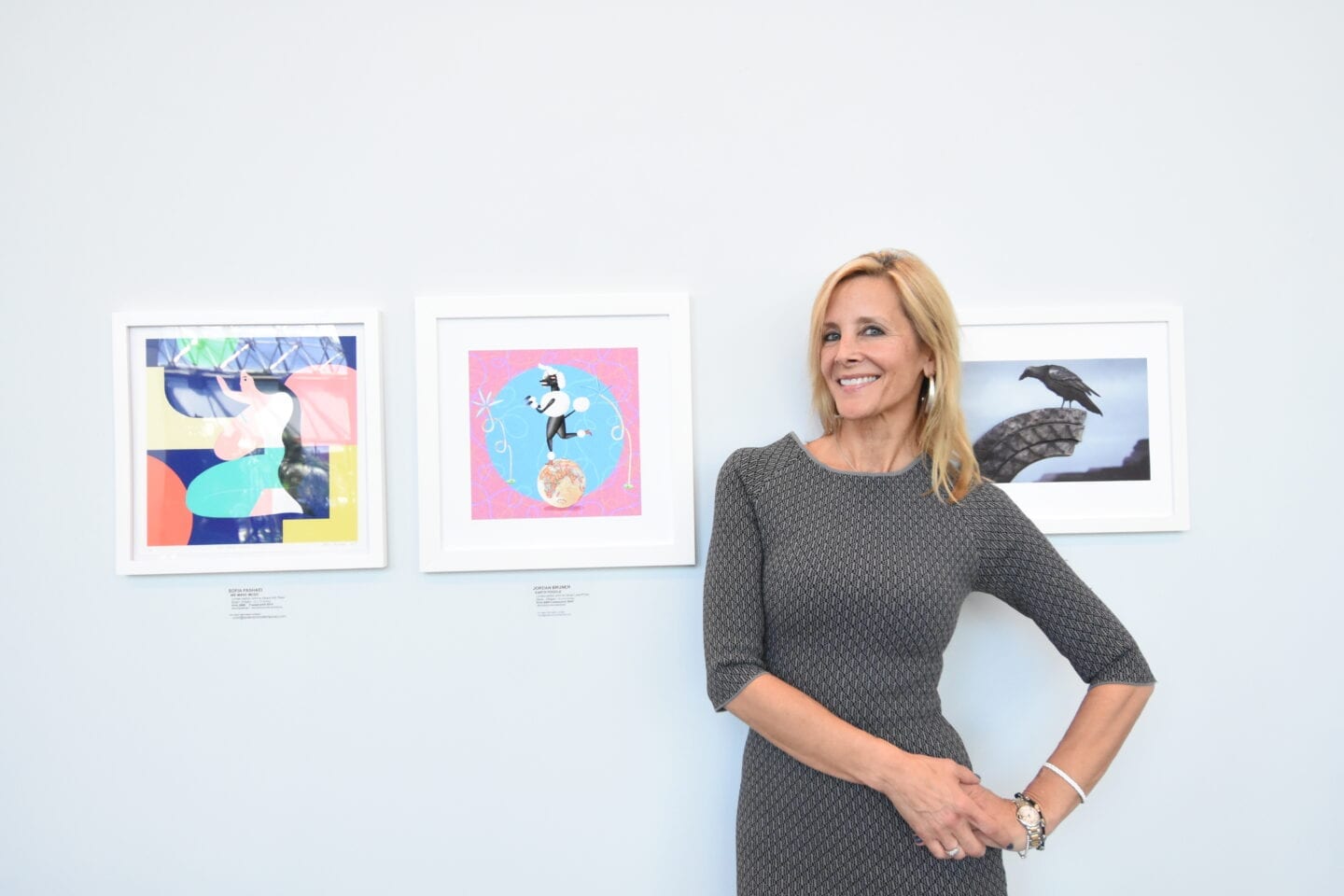 How did you start your career in the art industry?

I got my degree in French Literature and Art History in Montpellier, France, at the Université Paul Valèry. I fell in love with the arts and architecture. It’s beautiful medieval town that not many people know about. Then I ended up landing a job at Sotheby’s in New York. From Sotheby’s I went to Miami and I managed Kenny Scharf’s studio and simultaneously worked for Ocean’s Drive magazine. It was a time in the 90s where there was lots of culture and experimentation. It was great working with Kenny because every celebrity would come — you got Madonna, Robert DeNiro — would just be like another day in Kenny Scharf’s studio. It was a crazy time in South Beach. It was this weird mix of models and drag queens. It was a great time. 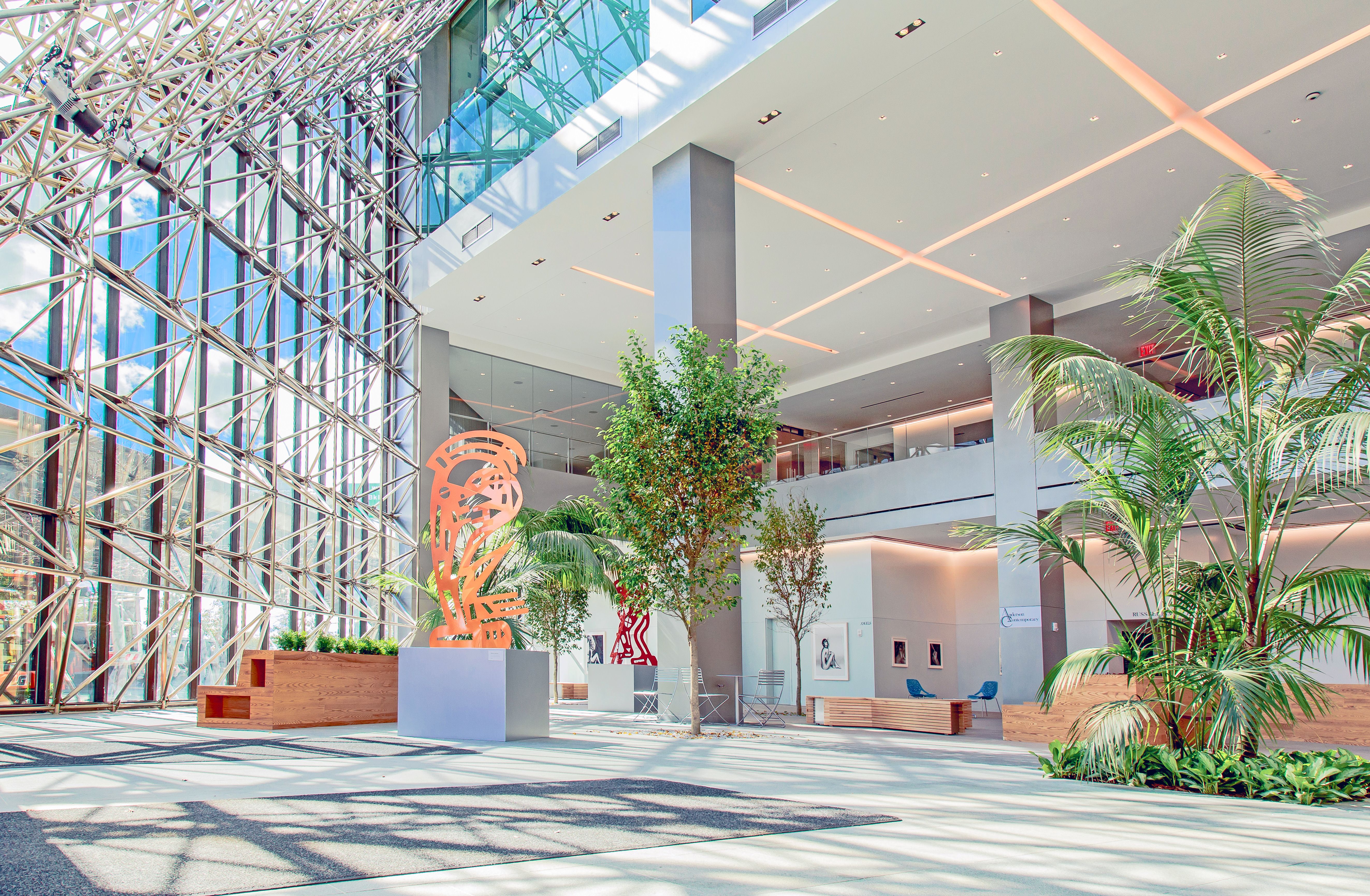 How did you launch Anderson Contemporary?

The owners of 180 Maiden Lane bought this building knowing the previous owners had a gallery in here, so they decided to re-establish the gallery. They knew a curator, which was me, and so that’s how that got started, but it sort of turned into an art center in a way because we’ve also had charity events where we’ve had musicians and dancers. It’s more than just a private art gallery, it’s like a gallery for the public,   very arts driven, yet the art’s for sale, so we’re very unique. 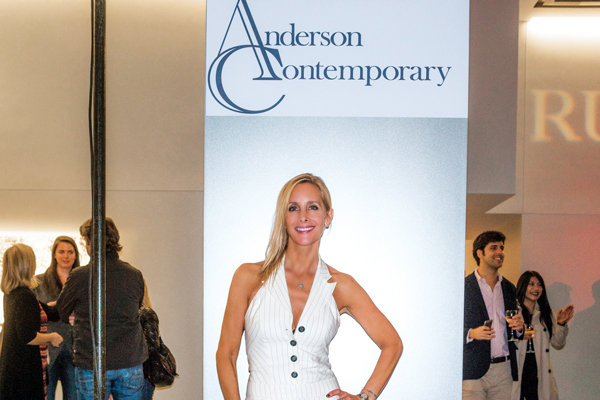 Photo courtesy of The Villager.

How is your space unique from other galleries?

I think we’re in an area that’s really up-and-coming. Jessica Lappin is trying really hard to build this area in a cultural manner. Everyone is trying to not lose the momentum down here — they’ve had a renaissance before — it used to be a ghost town in the evenings where no one would come to the Financial District. I think it’s had a couple opportunities where it can be a great neighborhood where people actually want to come and it’s failed, especially after Hurricane Sandy. Even though this is a private gallery, the drive is really for the community for people to really enjoy it and to bring exposure. I had a very touching thing happen to me when I was here, a homeless man came up to me, strung out, a little trepidatious, and said: “I just want to thank you. I’m an artist, and I lost my wife and kids. I have such an appreciation for art and I’m just so happy to come here and see quality curated art.” Of course I had tears in my eyes because even this man has an opportunity to enjoy fine art without being turned away. That made everything worth it. Of course, we are looking for new clients down here and I represent emerging and mid-career artists to give them more exposure. 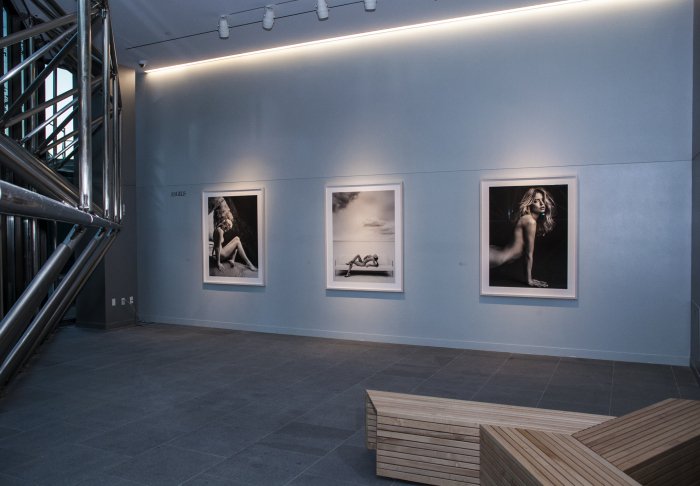 How does a public plaza affect the day-to-day of your gallery?

There’s definitely some caveats because you get people that don’t understand art and they just walk right up and want to touch it. So I had to put up some of these stanchions to work around those types of things. You don’t usually run into that when you have your own gallery. I have to explain the concept that this is an actual gallery that the art is for sale. It’s picking up and people are starting to get the message. Most people in the building love it, but initially they were also shocked because we launched with a photographer Russell James. He does beautiful philanthropic photography and he also combines that with beautiful models as well. Nipples were exposed and some of the people in this building pitched a fit. So I have some limitations about the things that I exhibit, but it was just hysterical to listen to these women to get upset about a little bit of nipple showing. And they’re so beautifully done, it was like looking at a Matisse — the bodies were formed and posed — they were just stunning pieces, so for anybody to criticize it — it was shocking. 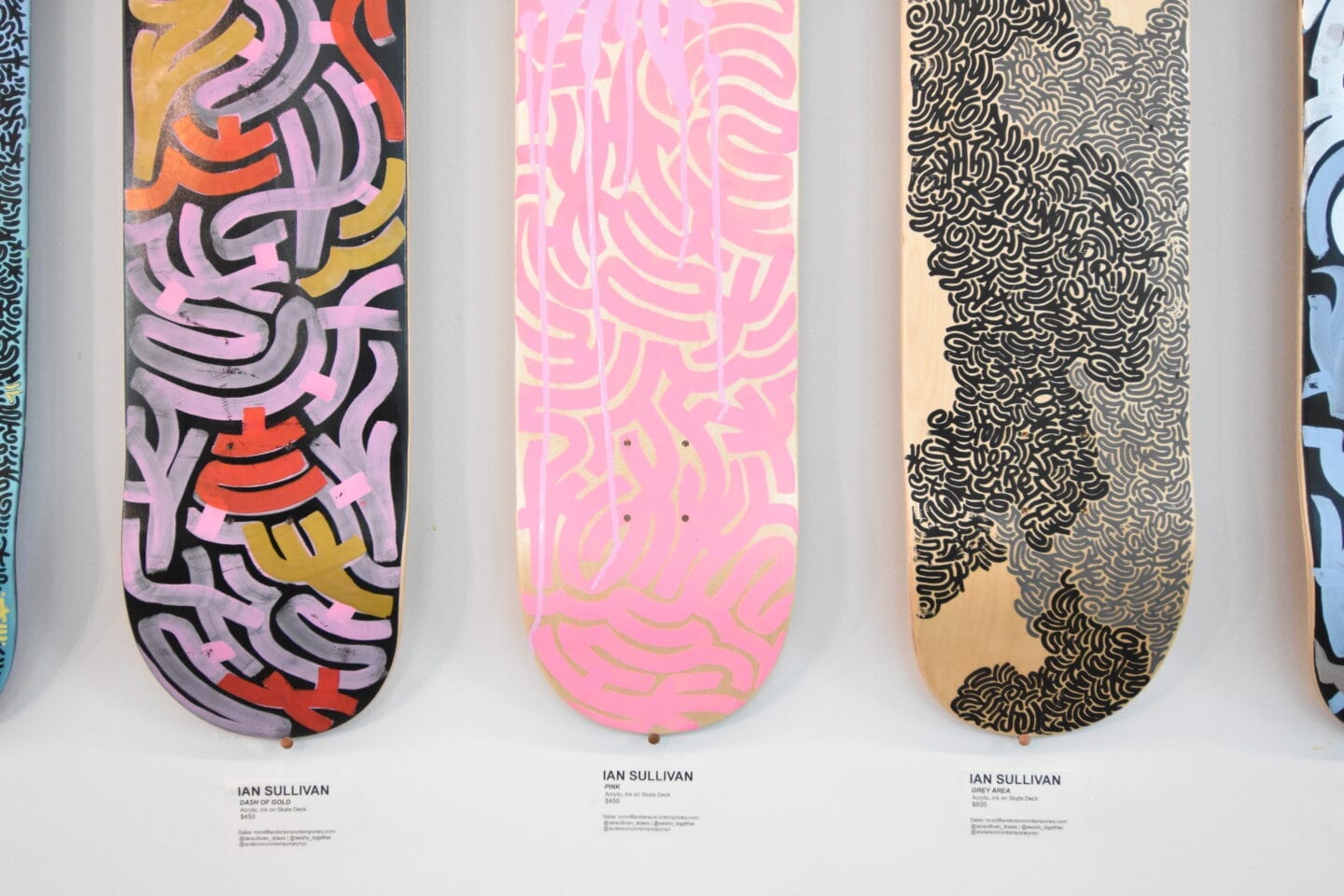 Then after I changed the show to something a little bit more conservative. Then they got the concept that this wasn’t just going to be artwork that was going to be up permanently, the space is an actual, curated gallery. You’re not going to like everything, but that’s the beauty of art — it’s subjective. So one of the ladies came up to apologize and said, “I’m so sorry, I didn’t mean to offend you by complaining to the building,” and I said: “I was not offended. It moved you somehow. Whether if it’s you hated it, and that’s fine, but at least it made you feel something.” The artist is doing their job and that’s why I’m here. In most lobby art, you just walk by it and you don’t pay attention to anything. I loved that she reacted because it made it controversial. That’s kind of the challenge of being in a public plaza too — people are going to be very vocal. She actually came around and then bought two little sculptures from me, so you never know. 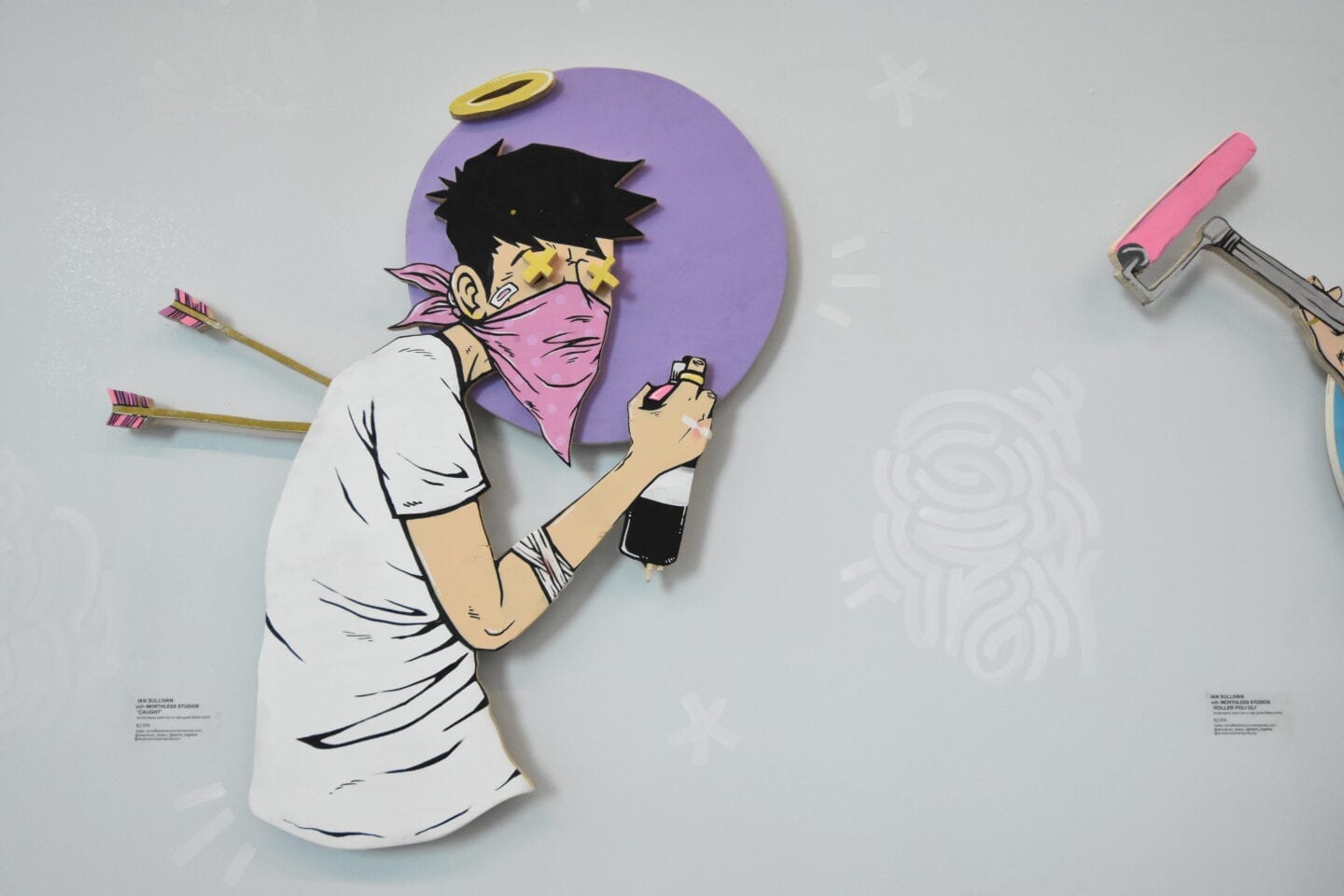 Where do you see the future of fine art in public spaces?

That’s another thing, you have to try to debunk the stigma of being lobby art. And I think Larry Silverstein’s doing that too with what he’s doing at the Oculus. A lot of major collectors who own buildings, like Aby Rosen, would put their own art collections in their spaces. I think that’s getting more traction now. A lot of commercial buildings the community are embracing art more and I think a lot of cities are starting to pick up on that. I think we are one of the frontier people doing this because there isn’t another gallery that is in a commercial lobby space that functions as an actual gallery. So it’s nice to spread the word that we sell the art on our walls. I think that’s what sort of sets us apart from the other galleries. 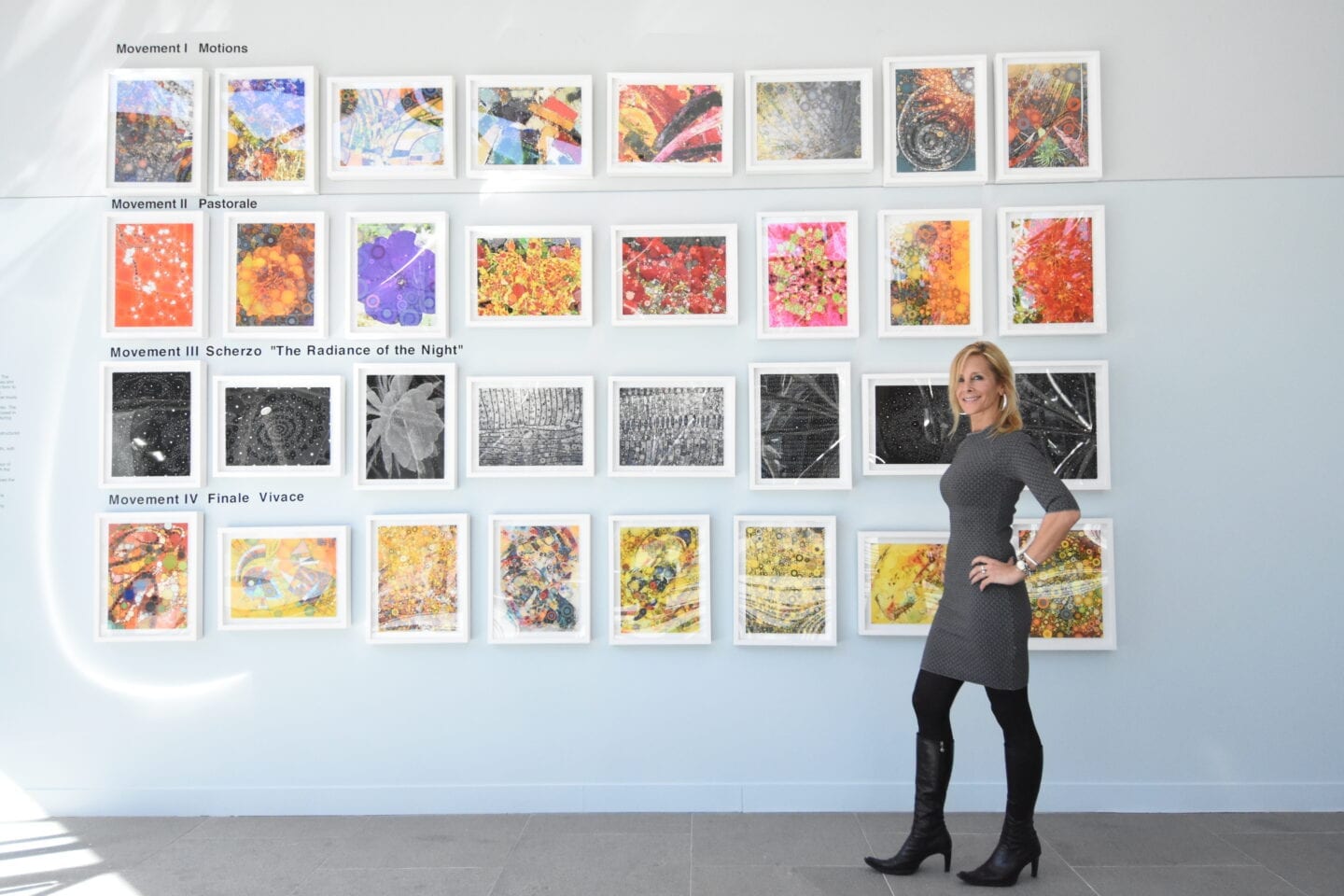 What kinds of art are you drawn towards?

I have such a vast taste in my palette. I love abstract art. I love the bizarre, I love the surreal, I want people to enjoy and think about the art. I like thoughtful pieces that have a story. I have a whole series of augmented reality pieces that are left from the Animation Film Festival, and I feel like animation artists are under-appreciated in the art world. Now with this augmented reality, there’s a virtual reality artist that I know where you can put the goggles on and actually go into an abstract painting — it’s really, really cool. I like technology and art, I find that fascinating. And again back to the animation artists, I was just really proud to have them at the gallery because you have to not only be able to paint or draw or draft images but you also have to be able to string a story together and put sound to it. I believe in the emerging artists as opposed to secondary market artists. There are a lot of forgers out there. I dabbled in secondary market and I found that with all the information out there, anyone can go online and figure out what the Warhol last sold for — it’s not as lucrative. And again it’s really more for the artist — we are trying to build more clients and bring them down here to bring more exposure. 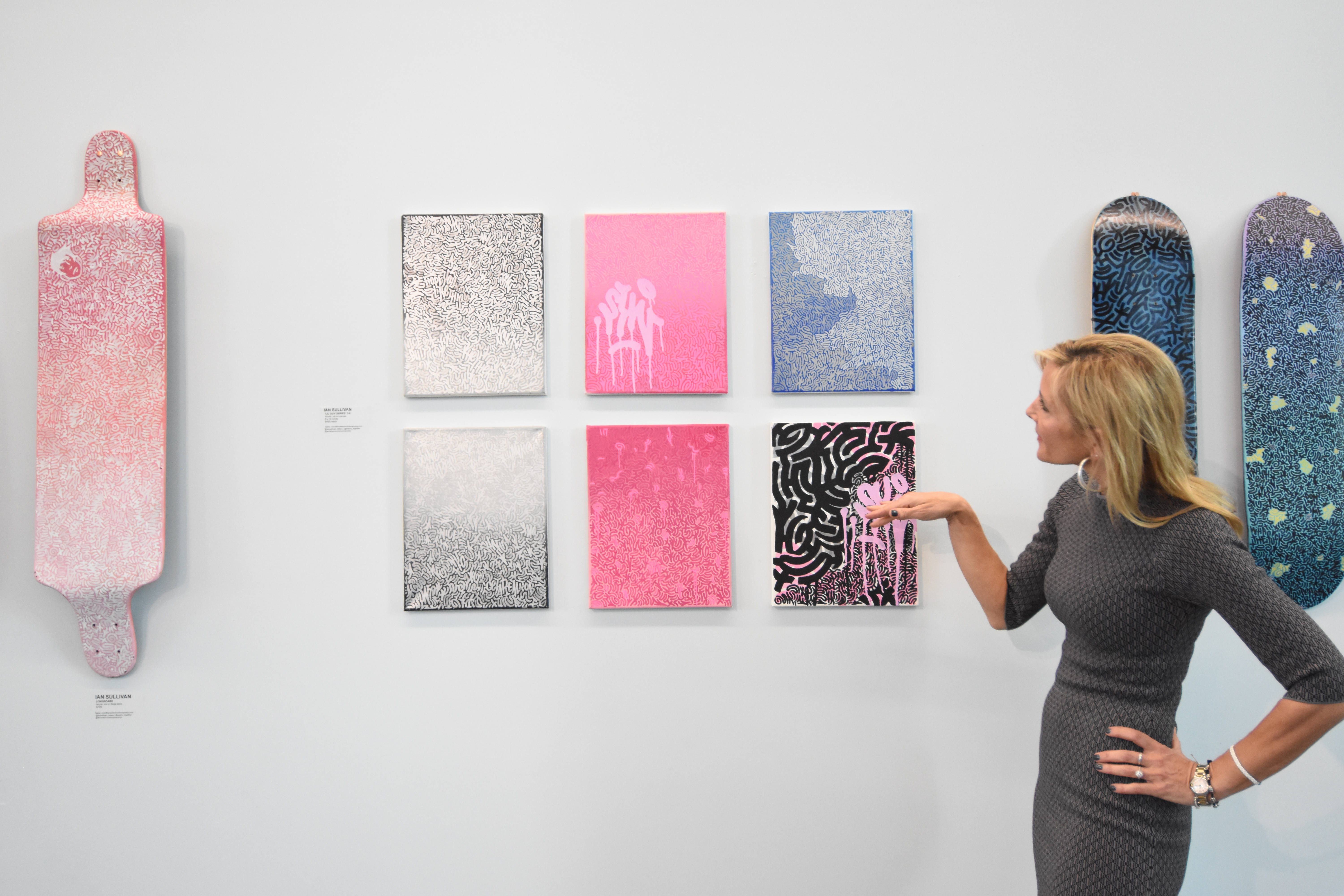 What is a typical day in your career?

Researching artists, telling people to stop touching the art (just kidding). I have a piano that’s part of this show for Vadim Prokhorov — he’s a composer and an artist, so for the exhibit I brought in the piano because the whole piece is representative of a symphony. It’s multiple pieces but they’re installed in a way that looks like sheet music almost. I like people to get interactive and feel like a part of it so I felt like having a piano next to this symphony of art. The talent that’s come on — people come during their lunch break they’ll play a little symphony and then they’ll leave. It’s a great place to be. My day typically revolves around planning all the shows, keeping up with my website, getting exposure for the gallery, figuring out when the next show’s going to be, and meeting clients.

The first word that comes to mind is “joy.” Art brings happiness to me.

If you could own any artwork in the world what would it be?

I would want to own Hieronymus Bosch’s Garden of Earthly Delights and Botticelli’s Birth of Venus. I also love Caravaggio’s Medusa.

Name a couple artists that you currently showcase.

Right now I’m really into the augmented reality pieces. It’s headed by Julie Gratz, who is an artist but also has organized a group of augmented reality animators. I thought it was the coolest thing and I’m hoping to continue to have her again in the animation film festival in October. I also love Vadim’s work, it’s very intellectual, it’s very musical, I love that he’s a composer artist, and I love his tribute to Kandinsky and Klimt, they’re very unique. I also had a lot of graffiti artists like Ian Sullivan and Boogie Rez, Boogie Rez, Bio Tats Cru, Meres One, Distort, and PHASE 2. Some of these street artists have been around for a long time and I love that they’re now getting their big recognition. 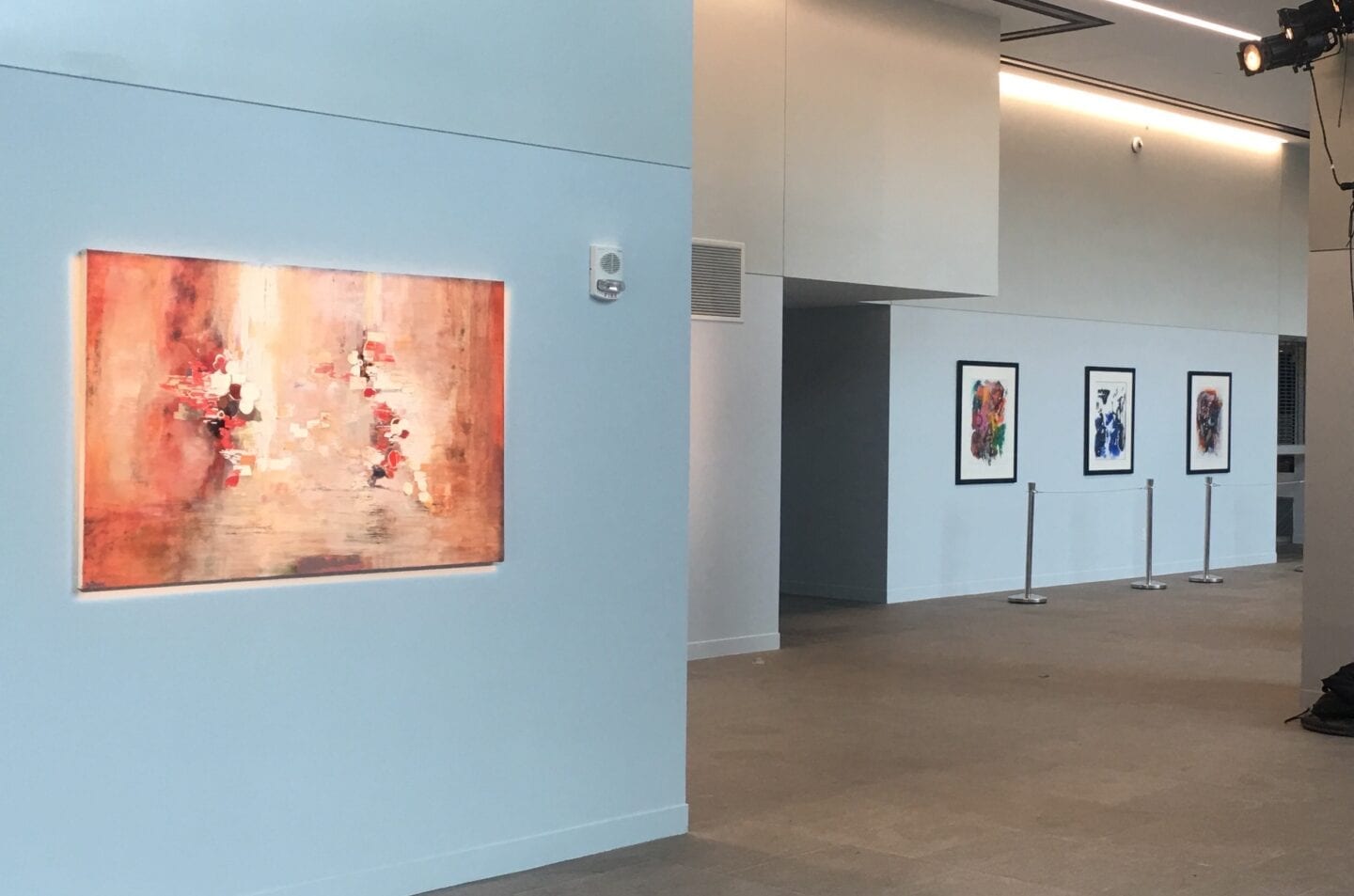 Image from the ‘Out of Line’ exhibition. Photo courtesy of Anderson Contemporary.

Tell us about the upcoming exhibition.

May 22nd is an Abstract Expressionist show. It’s a multi-disciplined group exhibition, and it’s all abstract — light, depth, color — is the focal point.

‘Out of Line’ is on view from May 22 until July 31. www.andersoncontemporary.com