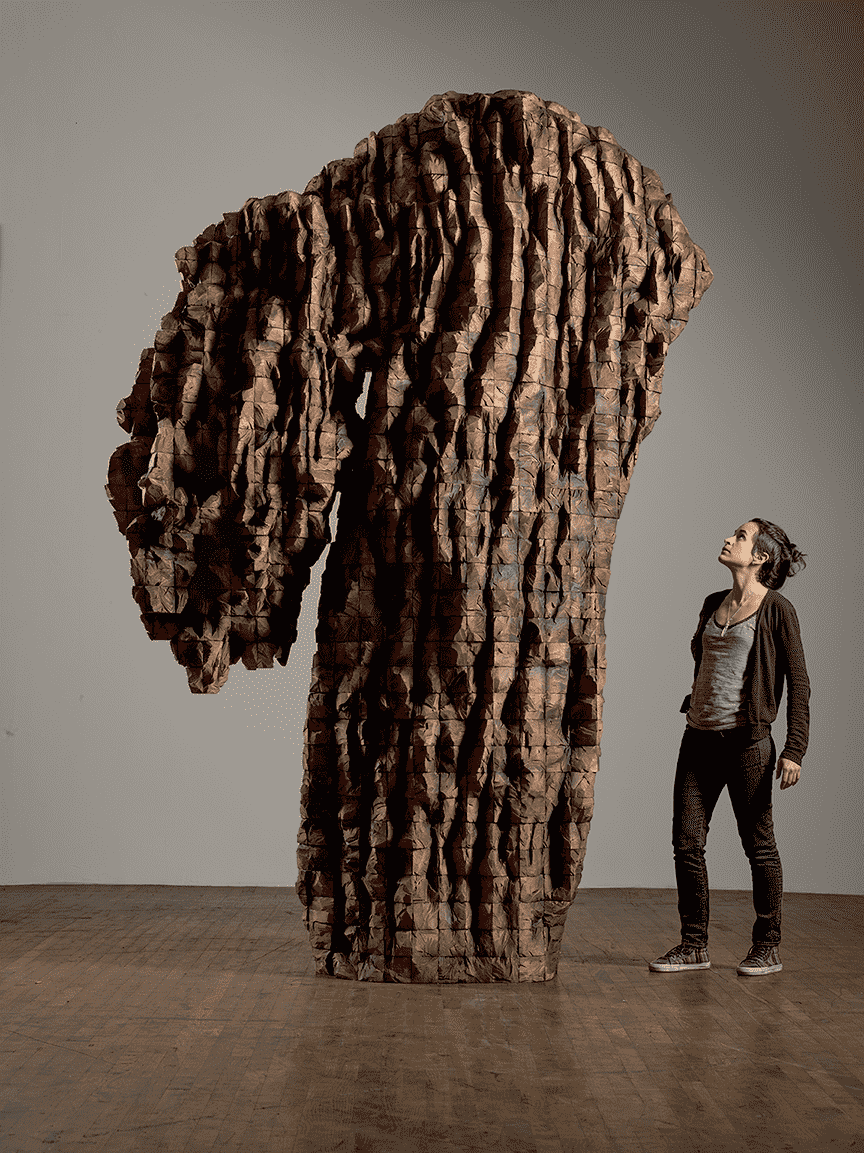 Celebrated as one of the most influential sculptors working today, Ursula von Rydingsvard is best known for her monumental cedar sculptures—evocative, meticulous transformations of cedar wood that elicit the power, grandeur, and mystery of nature. Born in 1942 in Deensen, Germany, von Rydingsvard is the daughter of a woodcutter from a long line of peasant farmers where she spent several of her early years in the wooden barracks of refugee camps after World War II. The artist’s works have been represented in the collections of more than 30 major museums including the Metropolitan Museum of Art, Museum of Modern Art, and the Whitney Museum of American Art. Among her many honors include the Guggenheim Fellowship, three awards from the American section of the International Association of Art Critics, and the International Sculpture Center Lifetime Achievement Award. She is also a member of the American Academy of Arts and Letters.

Von Rydingsvard’s newest exhibition, The Contour of Feeling, is held at the National Museum of Women in the Arts in D.C., which illuminates two vital elements of her art: colossal scale and emotional fragility. The exhibition features more than 25 sculptures that celebrate von Rydingsvard’s evolution and artistic development in a span over five decades, displaying a number of masterpieces that examine her predilection for emotionally charged, visceral art that is hand-wrought and richly complex. Von Rydingsvard’s approach to art merges poetry, personal touch, and well-practiced intuition. The subtitle of the exhibition, The Contour of Feeling, is drawn from the words of the artist’s favorite poet, Rainer Maria Rilke (1875-1926): “We don’t know the contour of a feeling; we only know what molds it.”

Although the monumental scale of von Rydingsvard’s sculptures is their most obvious trait, the artist’s works are also riddled with carefully placed details and a continued exploration of unusual materials, such as grooves of wood marked with black graphite and sewn cow intestines that encircle the perimeter of her piece, Ocean Floor (1996).

Beyond von Rydingsvard’s cedar sculptures, the artist also experimented with other organic materials, such as silk, lace, and pigment on linen paper. Included in the exhibition are poetic two-dimensional explorations and her most recent experimentation in collaboration with the Fabric Workshop—“Poderwac,” a work made from over 90 deconstructed leather jackets.

“Ursula von Rydingsvard has made an enormous contribution to contemporary sculpture. We are honored to bring this exhibition to Washington, where a new audience will discover the physicality of her works, from modest to monumental, and discover how she imbues common materials with evocative and powerful meanings.” —Susan Fisher Sterling, Director of NMWA

After 50 years of using the circular saw, von Rydinsgvard’s contributions to contemporary sculpture continues to take dramatic turns. At the peak of her career, the artist speaks to us about her experimentation with unusual materials and having her own trusted team of cutters whom she challenges every day with her unrivaled, complex drawings on the cedar for the cutters. Wearing safety gear and wielding heavy machinery, von Rydingsvard and her team saw, slice, stack, glue, and mark the works with graphite before assembling their final forms, an intuitive, labor-intensive process that can take nearly a year to complete.

Tell us how you got started in wooden sculpture.

I think as an artist it is extremely difficult to squeeze from your brain the places from which one draws in some of the most important decisions that get made in the process of making the artwork. I’m a believer that there are things from the unconscious that service that which you don’t even know—when or how or where. It’s not something that’s rational or logical but it comes from your gut, something that your will takes you to. I don’t know if I could say clearly from where the wood comes, but I do know that wood is a huge part of what my ancestors used and that it was a very important thing to them. They took great, great pride about how they put it outside of their homes as a display of pride.

Describe the emotional and physical process when creating your works.

It’s more complex than I can describe. The process is one in which I get an idea, and by idea it’s always visual and it’s in my head. I start with drawing chalk on the floor, basically indicating what form the bottom of the sculpture is going to take. It’s a very important part because the markings indicate the movement or curve as it changes from all the layers as I build. It becomes something that get magnified, minimized, or really exaggerated. The veins of it really take turn—some dramatic, some mild, but there’s a relationship there with every single move with all the cuts that you see.

How has your process changed from years ago?

I tear into it into a more aggressive way. I’m making things that are much more complicated that could never be made by a circular saw. I cut myself for something like 50 years. I am no longer cutting but I draw things for [my team] that really challenge them. I have over the years become more and more complex of what I demand of the cedar. It just gets more and more difficult for the cutters as they go along. And it’s kind of a good thing because as I figure out more ways to use the circular saw and I figure out more visual differences than I’ve had from the past. I get to work with cedar so that I never thought it could do what I force it to do. I am able to find new things that the cutting can do. Everything depends on my marks. Every single cut is guided by the drawing that I put on all four sides of the cedar board.

Have you ever been fascinated by other mediums besides wood?

I get so tired of cedar. I’ve had many huge flatbed trucks that come to my studio and I keep saying, “Ursula, this has to be the last. This is too much.” I went to the Midwest Museum and saw a parka that was made out of the bladder of a very special seal. They made this parka sewing many bladders together—and it had a translucent feel to it. I was so moved by what happened when I could see the sun through it that I sort of fell in love with it.

“Most people think of wood as being too sweet— i t’s not sweet. They say: ‘Oh, I love it. I want to make a coffee table!’—and I don’t want that attitude. I knew that the guts of an animal would bring something very disgusting.” —Ursula von Rydingsvard

Tell us why you incorporated animal guts into your sculptures.

Most people think of wood as being too sweet—it’s not sweet. They say: “Oh, I love it. I want to make a coffee table!”—and I don’t want that attitude. I knew that the guts of an animal would bring something very disgusting. That’s why I put the black graphite on the wood, it makes it more mine and I used the fourth stomach of a cow in partner with the cedar, so I’m not really getting away from the cedar. To tell you the truth I have not had any luck in getting away from the cedar because it seems to be still the best material that I can work with and be as sensitive visually as I need to be with my work. So the animal guts ended up being used. I thought it would be really disgusting. On the contrary, the intestines looked glorious when they dried, became erect, and showed off very complex surface mapping.

What was the turning point of your artistic career?

1986. Exit Art. Jeannette Ingberman was the director. The exhibition was in New York City, which got a lot of publicity with pieces going to places like the Met and Brooklyn Museum.. It was a huge success. Four years had passed before I had this exhibition, so I had a lot of time to sit and think. I taught at Yale for about four of those years, then I quit—and I think quitting teaching all together helped me put much more into my artwork.

Hangama Amiri: A Thread Between Yale and Afghanistan

Is there something you would change if you had to start over?

What is your most favorite work that you’ve ever created?

Have you ever had times in your creation process where you don’t like the final result?

Of course. And if I really don’t like them, for a number of years I set them afire in my upstate place where I store all my work.

What is one piece of advice that you could share with younger artists?

Don’t do large art unless you really really have to. Because the large art provides so many more problems than just making the domestic size pieces. But the scale brings problems and joys.

Ursula von Rydingsvard is based in Bushwick, Brooklyn. www.ursulavonrydingsvard.net

Jenna Gribbon Holds the Light at Her Solo Exhibition in London

8 Korean Women Artists We Love (From Korea, and its Diaspora)

The Women at Frieze London 2019