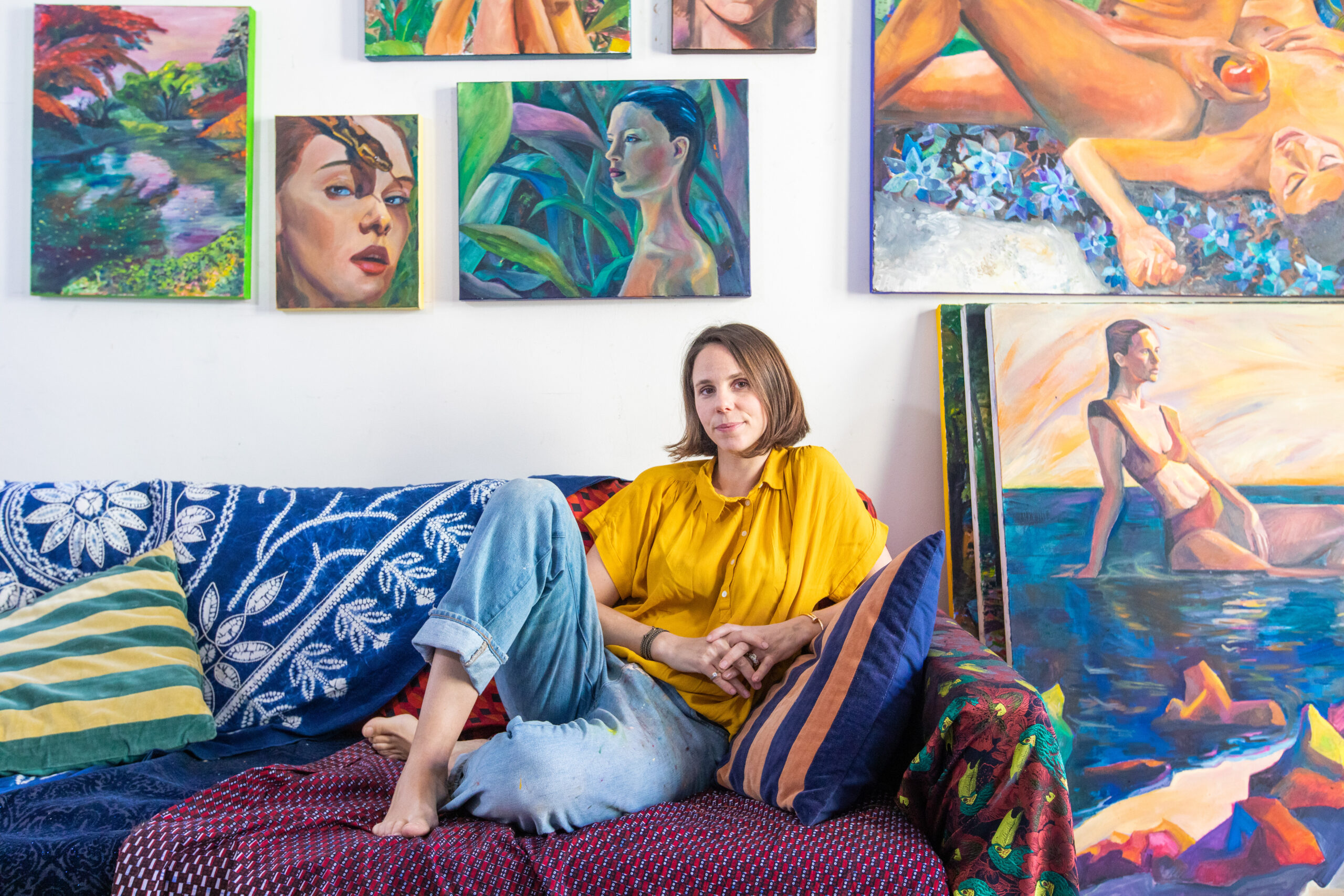 “Not all those who wander are lost.”

New York-based French painter Marguerite Wibaux allows her intuition to guide her in life and her art. She has spent much of her life traveling across the world to embrace people and their experiences. Gathering cultural influences from South America to China and now the United States, Wibaux’s art shares an explorative theme that focuses on everyday people through portraiture. In her current show TOGETHER (curated by Akeem Duncan) at The Yard in New York, Wibaux and fellow artist, Dhanashree Gadiyar, highlight the commonalities that connect us all. Wibaux’s Will You Listen to Cassandra? uses vertical textured symbols in the background: giving Cassandra a supportive parallel to standing tall in her truth. Her companion is kneeling beside her, but you can tell his encouragement is also unwavering. In other pieces like Ume’s Secret and Their Look, a narrative is stunningly formed with blends of sultry blues, purples, and variant shades of brown. They give way to the state of peace that meets us whenever we decide to move past fear and uncertainty. Throughout Wibaux’s artworks, she beautifully creates a contrast between each figure and bold patterns. These two elements strategically co-exist to tell stories of every human emotion.

Can you tell me more about the show?

The show is a two people show named Together. It kind of started with the portraits. The original idea of the curator was the power of portrait and connection. The word he always uses to describe my work is endearing. In the show, each portrait has a story. It’s a lot about empathy with other people’s lives. My work is really about meeting other people and stepping into their shoes. I paint from life. I get their stories and I try to document these stories through painting. I did a SoundCloud album of each of the stories I recorded. So, you get the painting and the story of the person through what I’ve learnt. This is very much part of my work practice.

Dhanashree was a great match for this show because she does two things: First, she’s crazy about patterns like I am. She also paints places, but not random places. She’s an immigrant from India and she records immigrants’ stories. She asks them about home, and she paints the places of how she imagines their home. It is very much about documenting people’s stories in a poetic way. So, it’s not so narrative, it’s really more like the nostalgia of where you come from. Our art practices are very connected. So, there’s this dialogue in the show that’s very interesting. 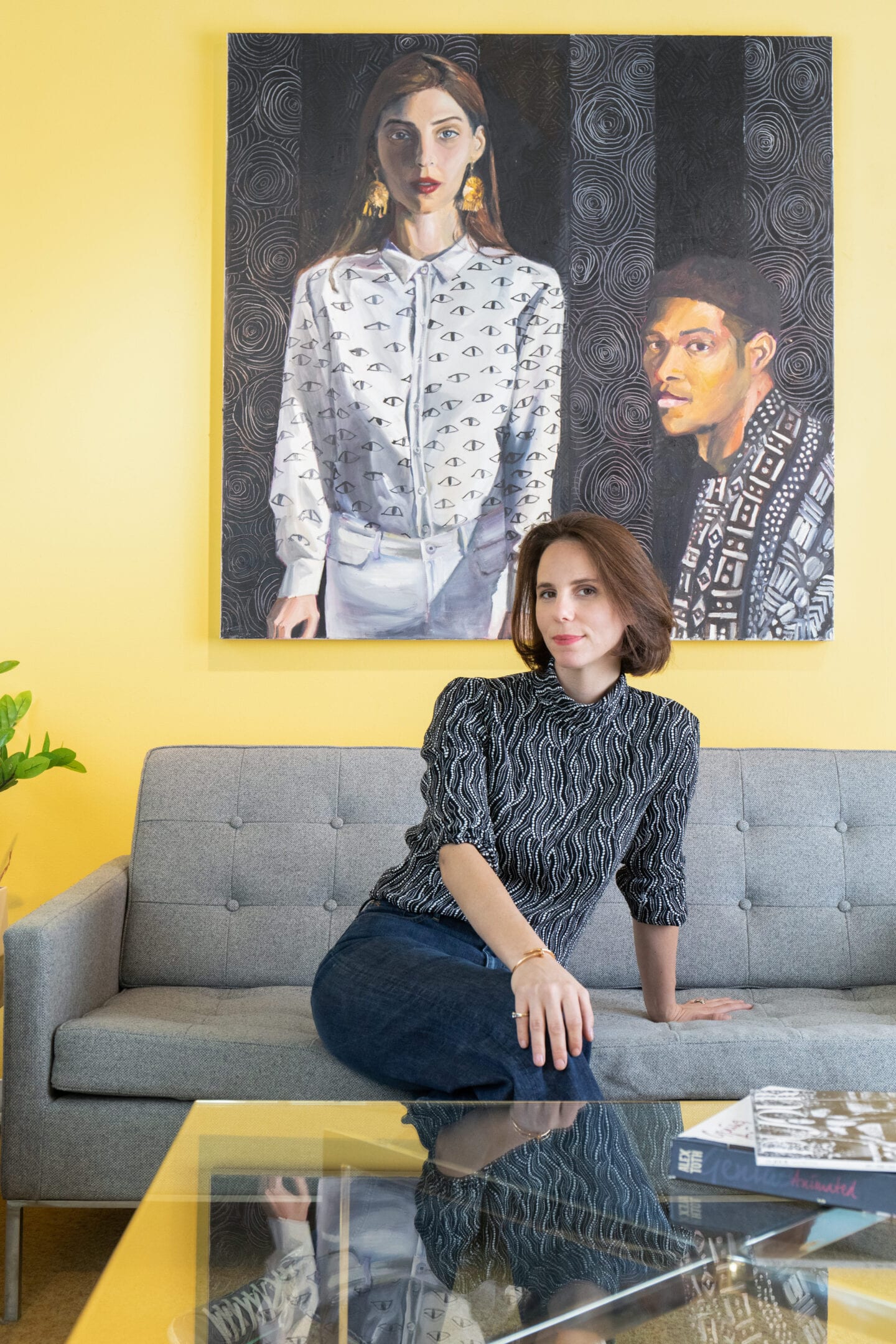 Marguerite Wibaux pictured with Will You Listen to Cassandra? in the background.

From the beginning of your art practice, were you always interested in painting from other people’s perspectives?

I started with portraiture and wanted to paint from life. First, I’m not a good photographer (laughter). I cannot paint from a picture I’ve taken because I really suck at it. I’d rather paint from other people’s pictures. But this body of work started in 2018. Portrait is something I always do whenever I meet someone nice. But I also have many other series and topics that I’m exploring. I’m re-enacting mythological stories and other stories with actual people from now. My other body of work is mixing actual people that I meet and paint with my own storytelling of feminist stories I want to put forward. So, the portrait is like the base and foundation for all of it.

Did you use acrylic paint?

No, only oil paint because I feel it is much more forgiving and it is way more sensual. And I like my paintings to feel sensual.

For Their Look, how did you choose the pattern on his shirt and in the background?

This was the only portrait where I didn’t paint from person. I painted from a picture I cut out from a magazine. I had forgotten all about it until one day I thought no models would come during the times of lockdown. I found the picture and I didn’t know if it was a boy or girl. So, I wanted to play with that ambiguity. I added the cap and lace in the shirt to play with masculinity and femininity. In the features, I added light colors to suggest femininity and a bad ass mood to show masculinity. It’s called Their look. When I did this piece, I had no idea about the show. So, it was very much a painterly exploration about what makes a difference in a man’s face or in a woman’s face. For the pattern in the background, it was more plain colors. But then it was struggling with the painting so then I decided to add layers and layers of patterns until I could find the right balance between the figure and the background. 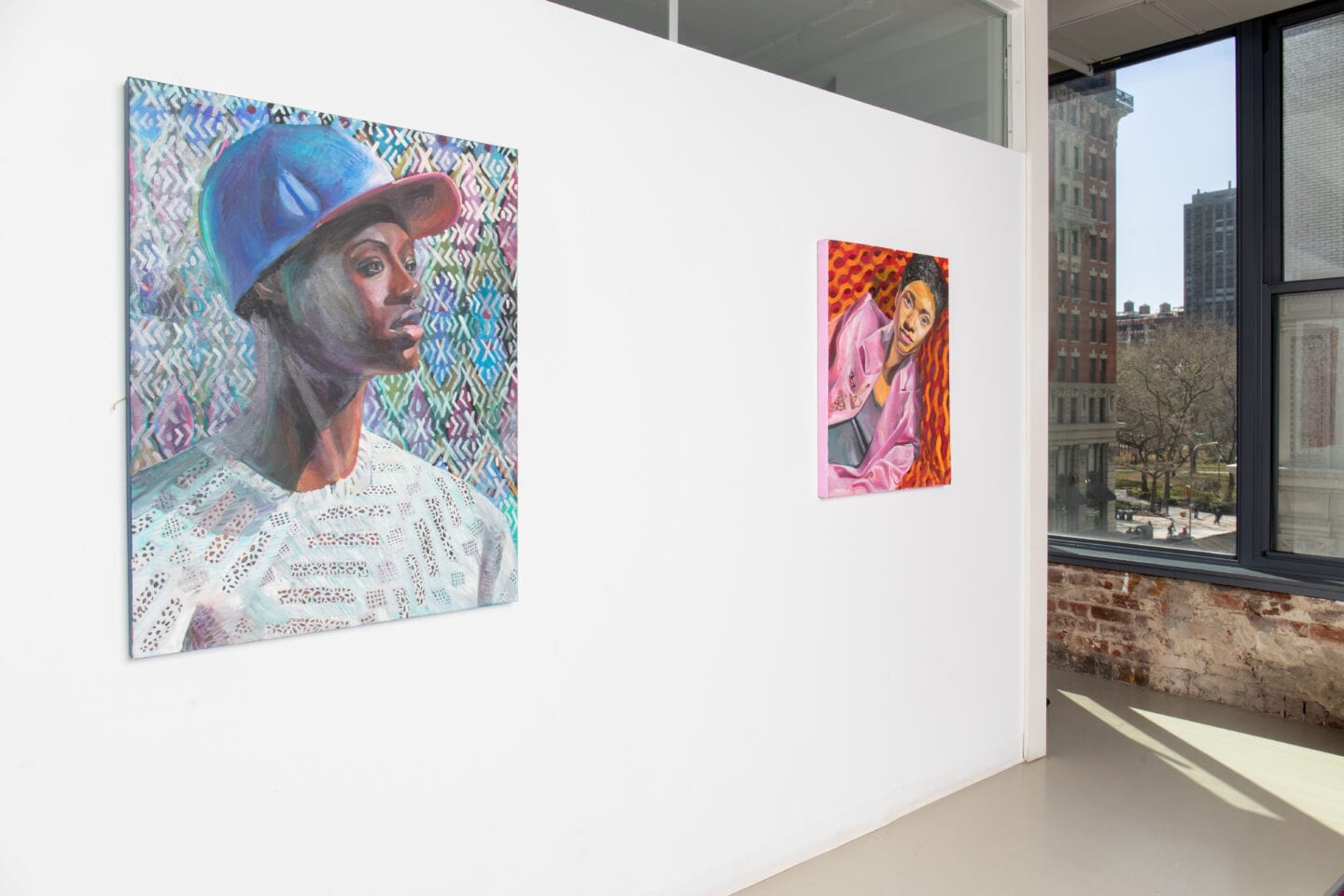 From left to right: Their Look and Dakota’s Lightness of Being

How has the feedback been for your show?

It started a little bit slow because it is still reservation based. But I’ve had a lot of people who are interested.

Which do you paint first, the person in the foreground or the pattern in the background?

I always paint the person first. When the figure is done, then I decide about the pattern. It’s like adding music to a scene, it gives the mood. Like music, patterns are universal. I’m inspired by African patterns, Indian patterns, Malaysian patterns, French patterns, etc. Every country has its patterns and style that I like. Patterns are like music in which they have rhythm, repetition, baselines, and high notes. So, I’m always on the lookout for patterns. Once I’m finished the painting, I look into my references and I create something with the colors and mood I feel will enhance the painting. 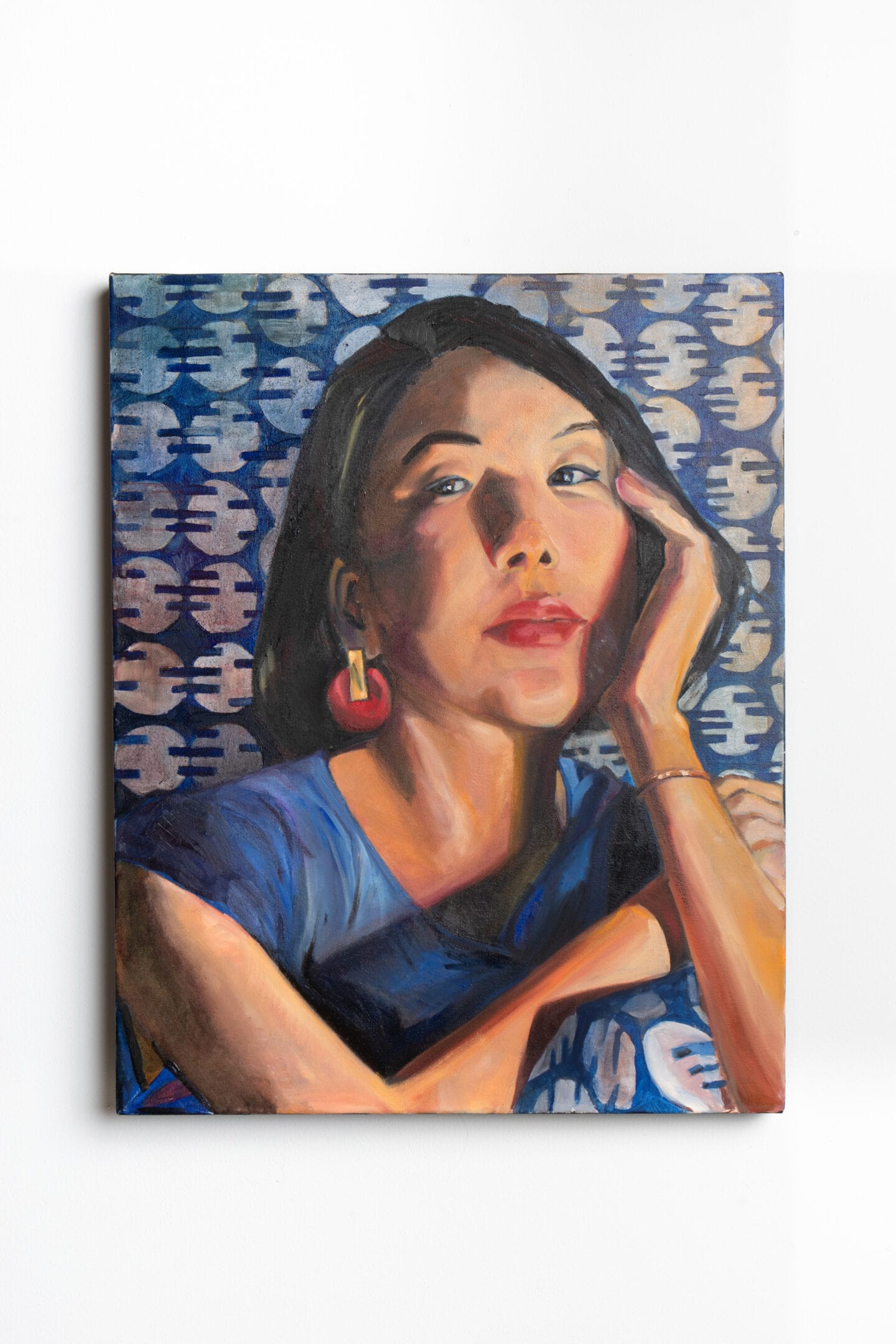 Do you listen to music while you paint each pattern?

Not so much, I have a plan when I start a pattern. I do sketches and I know where I’m going. So, it’s not like a freehand-inspired-by-music product. Music is very important in the sitting session. It’s very interesting when I’m asking all these people, “how was the painting experience?” and all of them say “your music is really cool!” And it’s unexpected because I lived abroad  for a long time in many different countries, and I speak many different languages. So, I listen to French, Italian, Indian, South American, African, and Chinese music. My playlist is all around the world.

What do you hope people take away from the show and your artwork in general?

I think everybody takes away something different. It’s my first show here and people are impressed with the quantity. It’s a lot of artwork. The models say that I paint quite fast. I know where I want to go and when I do something I’m sure about what I want to do. If I don’t like something, I erase it and start over. But I don’t hesitate much; very straightforward. Many people have been amazed with my technique because they’re oil paintings and my technique has evolved, which you can see as they’re not all painted the same. I’m self-taught and have been reading and absorbing a lot of techniques in addition to working a lot. What’s also stood out is my social experimentation part of it. I paint diversity and I move through different social groups. I like different environments. Nowadays in New York, we have a lot of black artists that are bringing back the topic of figuration and portraiture. I like it because I’m very inspired by their work. I also like people under their 30s because it’s a part of your life where you have to figure out everything and it can be very intense.

I don’t do any commission portraits. After the show I had 3 orders for commission portraits, and I said no to all of them because part of my practice is that I don’t want people to look at themselves. I want people to look at other people. It’s about empathy and I want people to feel connected as if the emotion on the painting could be their emotion. Another artist said, “I want my painting to be so singular, so precise about someone that they become universal.” There’s a point where you really dig into the human condition and it becomes for everyone. I really like this approach. 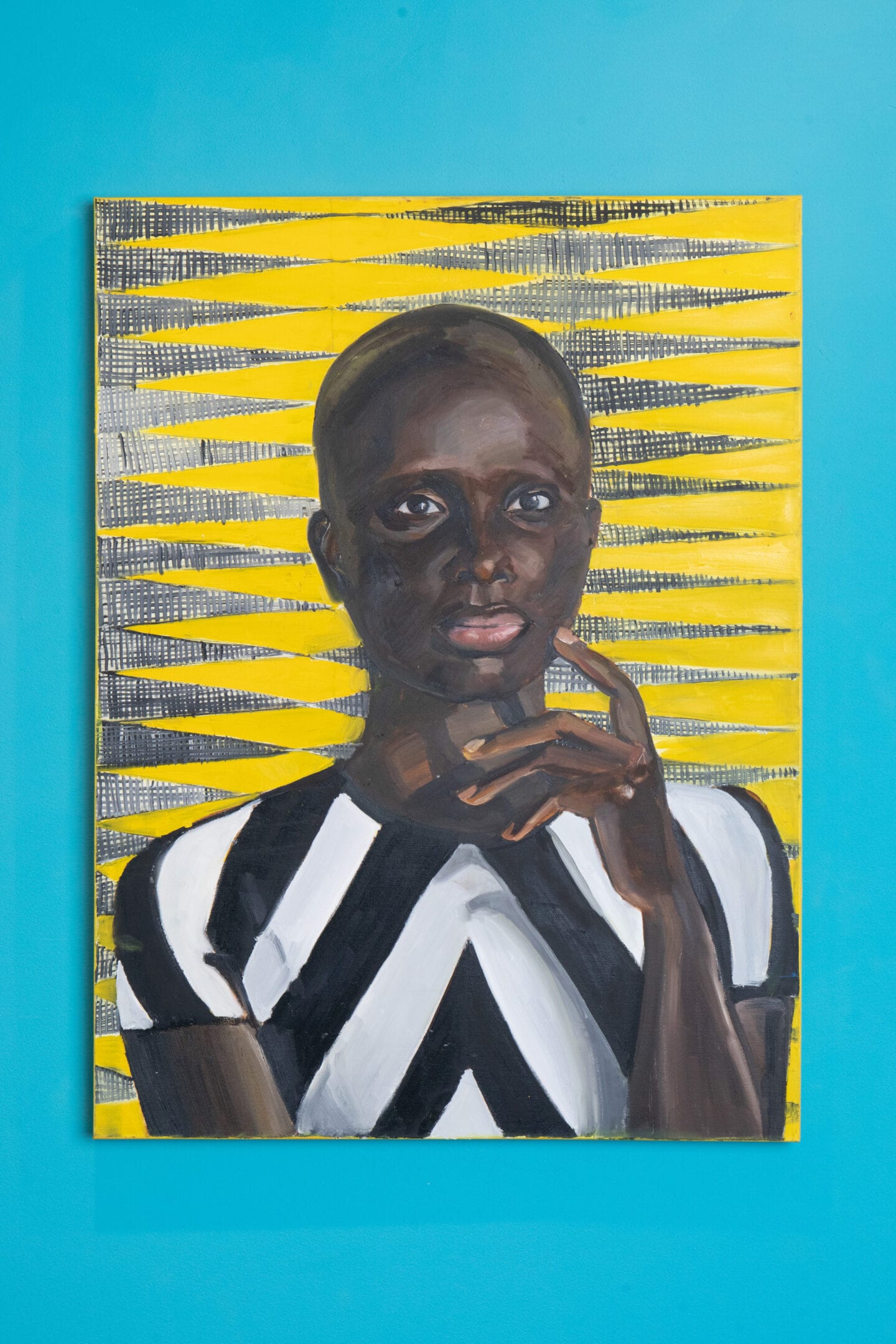 How long have you been painting?

I have a bit of a paradoxical career. I was raised with art because my mother is an artist as well and my grandmother is an art historian. So, I grew up in rooms surrounded by art. But first, I had a career in advertising for fashion and luxury brands for about 10 years. I was a good student and had the safe way because my parents told me to do so, especially my dad. I’m grateful for that because I gained my independence and freedom, it was really important. But then four years ago, I moved to Boston and decided to turn a life-long passion into a full-time occupation.

I started painting everyday four years ago. Of course, I do other things like going to art shows and museums. I’m not only about painting but everything I do is art.

What advice would have for an emerging artist?

Believe in yourself. Nobody else can believe in yourself like you can. If you don’t start believing in yourself then you’re not going to convince anyone. Also, accept the rollercoaster of emotions. It’s ok, it’s a part of the job and it’ll make you a better artist in the end.

RSVP for a private tour of Marguerite’s exhibition, on view until April 17: